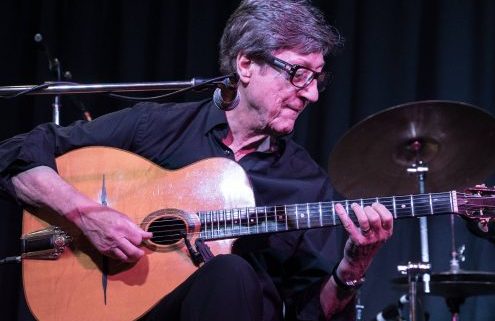 Gray Bartlett is an icon in New Zealand, he is probably our most well known guitarist and has had incredible success around the world, particularly in Japan. Gray has just completed his latest Album called Private Conversations and he is currently on tour in New Zealand. Here is what Hank Marvin has to say about Gray.
Hank’s Review: “Gray Bartlett is something of an institution in NZ, well that’s what he told me.  Seriously folks I’ve had the pleasure of getting to know Gray over the last couple of years and discovered that he’s a man of various talents. However it’s his musical talent that really stands out on his latest CD, “Private conversations” which allows him to display both his virtuosity and versatility as a guitarist, which reminds me I need to practice more. The choice of material is diverse, engaging and he interprets the compositions with clarity and sensitivity; qualities that many guitarists lack. Gray’s command of different guitar techniques is also demonstrated as he switches easily from beautifully performed finger style acoustic, to slide guitar, to country rock and even to heavy blues rock; yes, our boy has serious chops.Check out Gray’s version of APACHE it’s almost as good as mine. Congratulations to Gray on a FAB CD, buy it, you’ll love it.” Hank B Marvin go buy Gray Bartlett’s album now.

Gray Bartlett
Scroll to top
We use cookies on our website to give you the most relevant experience by remembering your preferences and repeat visits. By clicking “Accept”, you consent to the use of ALL the cookies.
Do not sell my personal information.
Cookie SettingsAccept
Manage consent